Nuttier than a squirrel’s pantry

THE OTHER MORNING I was looking out into the forest behind our house, admiring the color green, when I noticed that Fuzzy the Squirrel was on the ground, up to something.

He rarely allows his little paws to touch the ground, preferring to stay above it all in the trees… or in our gutters… or on our deck.  I was intrigued. 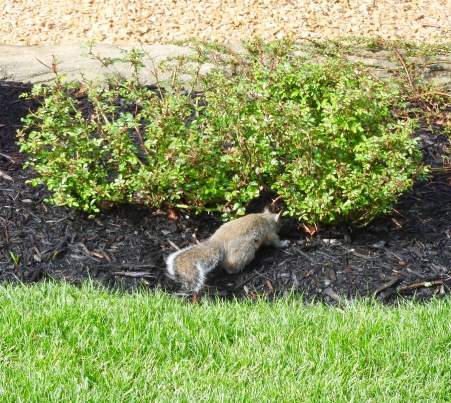 I’D BEEN THINKING ABOUT the origins of the saying, nuttier than a squirrel’s pantry, all morning.  So when I saw Fuzzy, in a flash of inspiration, I decided to ask him if he could explain the meaning of this saying, from his point of view.

Straight from the squirrel’s mouth, so to speak.

WELL, MY GENTLE READERS, I was not prepared for what our favorite squirrel had to say.  But I give him credit, he told it like it is.  He didn’t mince words, nor did he spare my feelings.

YOU SEE, COME TO FIND OUT, from a squirrel’s perspective, this seemingly innocent and silly human saying, is offensive and disparaging.

Squirrels take it personally, looking down upon us humans who say it.  To them, this saying is animalist.  Decidedly not PC.

And inaccurate, as Fuzzy was quick to point out before he scampered away.  “Lady, we got more than nuts in our pantries. We got seeds and leaves– and sometimes a good old-fashioned purloined tomato from your very own pots of veggies.”

Thus he confirmed that: 1) he did steal those tomatoes years ago;  and 2) that squirrels might not be as nutty as we humans think they are.