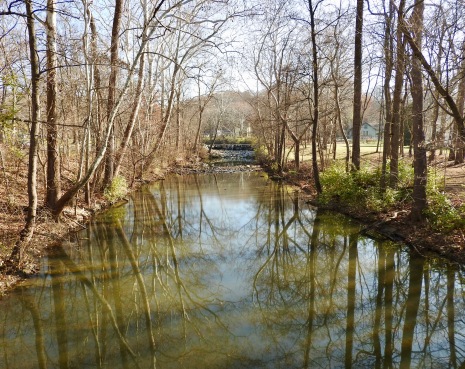 Went for a walk. Standing on a bridge over the creek I saw the waterfall down the way.

Noticed the beautiful bare tree branches reflected in the creek’s still water near the bridge on which I stood.

So calm. So pretty.

Continued walking.  Found the waterfall where the water was flowing over it.

Enjoyed watching as the clear water moved forward, not so gracefully tumbling over the falls.

Loudly. With enthusiasm and purpose.

Found myself reflecting on perspective and change. On always moving forward, appreciating peacefulness, but never allowing oneself to become stagnant.

Decided that the message was for me to let last year’s concerns float away, never forgotten or marginalized, but utilized as starting points so that next year’s plans can coalesce.

And on that bit of self-awareness, I shall wander off into the real world where busy people and half-finished projects are waiting for me.

To do that which I do.

And as for The Spectacled Bean, well– don’t expect me back here until mid-January when winter is in full swing.  I’ve decided to go on a brief blogging hiatus, if the fates allow.

71 thoughts on “As The Year Ends, Reflections As I Walk By A Creek”