Today I’m joining Thursday Doors, hosted by Norm Frampton, by sharing photos of a fun + unique building that we stumbled upon in a Cincinnati suburban park.

On a whim we stopped at a new-to-us park called Home of The Brave Park.  This 54-acre park, established in 2012, is located in Symmes Township, Hamilton County, OH.

Along with sports fields, playgrounds, a shelter, and a veterans plaza, this park has a building unlike any other I’ve seen around here.  It’s painted on all four sides to explain the history of the township, one side focusing on the man who founded the township.

A fast Google search lead me to the life story of John Cleves Symmes, the man featured on one side of the building.  In a nutshell he was a rich NY/NJ Revolutionary War dude who came west to Ohio to make his fortune by selling land that he did, and did not, own to settlers moving this way.

He’s credited for naming many places around here, and is also the father-in-law of President William Henry Harrison [#9] and grandfather of President Benjamin Harrison [#23].

And with that, here are the photos of the exterior of the building.

DOUBLE DOORS on the front of the building. 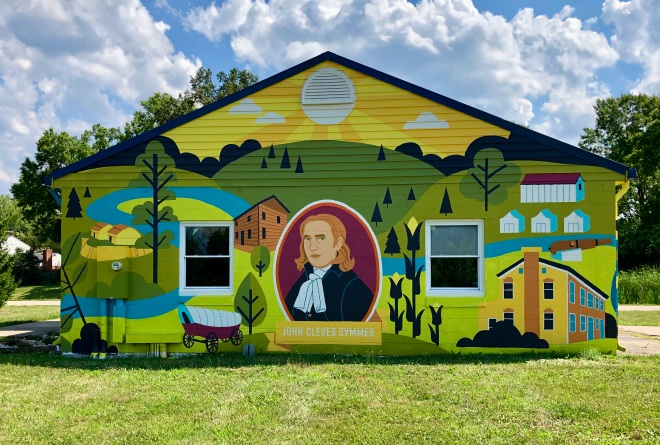 The side of the building where the image of John Cleves Symmes dominates. 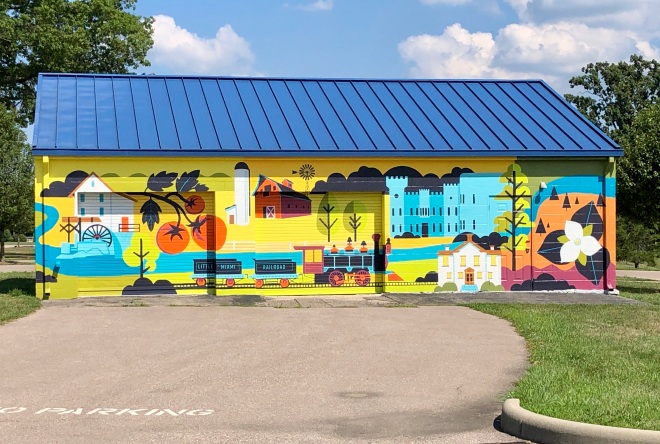 The back of the building showing a melange of images that apparently summarize this township. 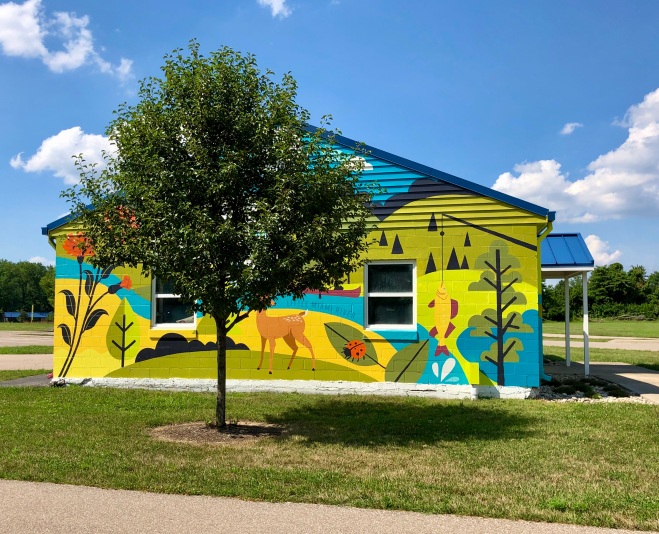 The fourth side of the building. 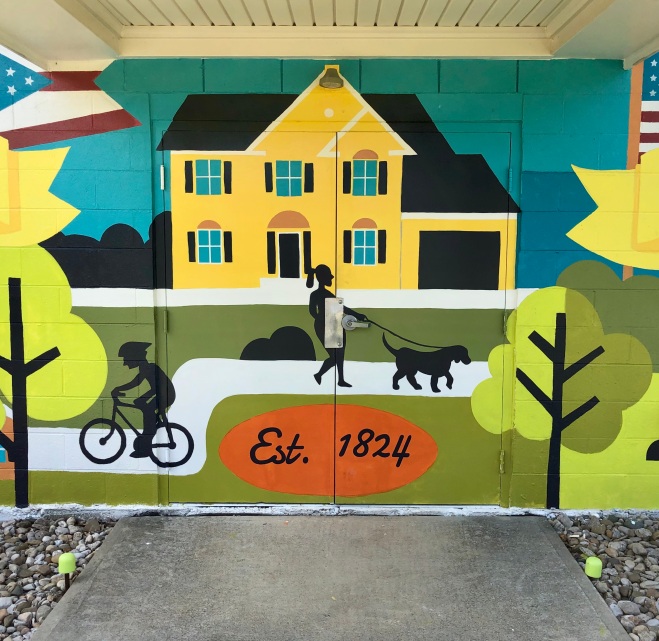 A closer look at the FRONT DOOR DOUBLE DOORS on which a FRONT DOOR and a GARAGE DOOR are painted, hence creating a double door, double door extravaganza. 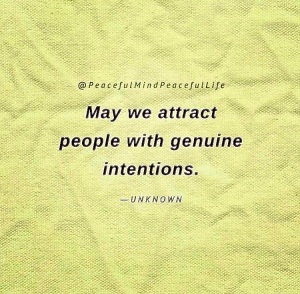 I met an acquaintance for lunch.  She’d texted me the afternoon before we had lunch to arrange where she suddenly wanted to go to lunch.

Nowhere convenient, I’ll tell ‘ya that.

However, I happily rearranged my schedule to accommodate her  preference, but that fact seemed to escape her notice as we sat there eating and talking.

Nope, she was on a rant about all that is wrong in the world;  and she needed me to know that in her opinion I was too happy when discussing the wrongs in the world.

My equanimity seemed to bring out the demons in her.

She was perturbed with me because I wasn’t in the depths of despair over The Donald’s latest bull sh!t move of telling people to go to work when they’re sick.

[How stupid &/or senile is that man?]

Nor was I despondent enough over Elizabeth Warren, the competent presidential candidate who the news outlets marginalized, dropping out of the race.

[How sad is it that our country is so backward when it comes to electing leaders?]

Nor was I gnashing my teeth over the gloomy grayness that has been the subtext of our winter weather here.

[How soon will spring get here?]

Yep, she was peeved with me, but she’s what I’d call an Eeyore, a bit on the gloomy side.  Always.  Which means, of course, that my Pooh-like demeanor rankles her.

I do like her if only because she reminds me that someone else’s opinion of you need not define you.  And that by talking with a variety of personality types you can, if you are open to it, learn a few things.

Like for instance, you can learn that the word ‘happy’ can have a negative connotation. Who knew, huh? 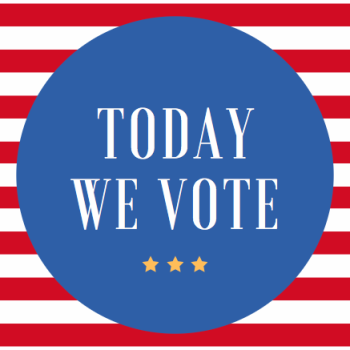 ONCE AGAIN OUR VOTING PRECINCT has been assigned to a different polling place. In the 20+ years we’ve lived in this community we’ve voted at:

HIM: Where am I voting today?

ME: With the Presbyterians.

HIM: Which Presbyterians? The ones near us or the other ones?

ME: The ones near us. The ones who were hidden down the lane.

HIM: They’re not on the lane anymore?

ME: No, they’re in the same place on the lane but they’ve built a big driveway to the road, so that’s how you get to them now. They have a big welcome sign on the road.

HIM: How do I get there?

ME: Go down the road past the street that takes you to the United Methodists, but not so far as to make that sharp right turn into the Roman Catholics. And for goodness sake don’t go around the curve and make a right into the Bible Believers Baptist Church compound. Who knows what weirdness is behind the bunker they’ve built around that building.

HIM: OK. So where do I turn to get to the Presbyterians?

ME: It’s easy. When you see the big welcome sign on the left, turn left, and you’ll be in the right place.

HIM: Are you telling me directions to the polling place or voting advice?

May you find your polling place without trouble. May you say *yes* to the school levies and mental health issues and support for the less fortunate. And for the love of all that is good and holy, I beg of you, may you dump the Trumpian chumps.

When they ask you, my gentle readers, when did you first notice that Ally Bean was beginning to fray around the edges, please point them to this.

OBSERVATION #1 {inside the grocery store}

Our store is having what I’ll call a re-shelving extravaganza in the middle of the store.  I don’t know why they’re re-setting the store, but many items that were somewhere on a shelf, are now somewhere else, often many aisles away.

I couldn’t find the crystalized ginger which was part of the healthy food department, so I asked an employee where it might be now.

Without a hint of irony the employee said: “It’s in aisle 7, under the sign that says Meat Snacks.”

And so there it was, by the beef jerky. 🤨

Leaving the store walking to my car, I noticed a bumper sticker on a newish SUV with a license plate that said it was from this county.  The vehicle appeared to have kid stuff in the back seat.

I mention the possible kid angle because the bumper sticker was, to my way of thinking, a bit coarse for a family vehicle around here in this God-fearing politically conservative community.  I wasn’t clutching my pearls because of it, but I was surprised.

In large letters visible from far away the bumper sticker said: BERNIE F*ck This Sh!t.  [I’ve modified the message because this is still a PG-13 blog, but you get the gist of what it said.]

And so there it was, on a vehicle parked next to the cart corral for all to see. 🙁

Driving home, slowing down to make a righthand turn at the light, I noticed that on the large community calendar electronic sign in front of the fire station there were three words that seemed out-of-place.

While we live in an upscale subdivision, most of this township and county are less well-off and rural;  hence the conservative MAGA political nature of things around here.  Thus when I saw what I saw I was bemused, but slightly baffled.

Not because of anything rude, but because I cannot fathom why the community calendar electronic sign in front of the fire station said: “Et tu, Miami?”

And so there it was, a classic Latin phrase made famous by Shakespeare + a reference to the North American Indian Algonquian people. 🤔

So, things making sense where you are? Or are things slightly off-kilter everywhere you look?

ON SUNDAY WHILE READING COMMENTS on tweets about the White House Correspondents’ Dinner with the mean lady who said the bad things [either Michelle Wolf or Sarah Huckabee Sanders depending on your point of view], I saw a comment that said: You spot it, you’ve got it.

I had no idea what this meant so I googled it and after a cursory investigation discovered that this is a way of saying that: if you notice someone’s hurtful behavior and it annoys you greatly, then you’re aware of this behavior and feel the way you do because you do the same thing.

The meaning of this new-to-me phrase was a surprise.

I thought it was going to mean that if you’re aware enough to notice that another person is behaving in a bad way [spot it], then you’ve got the situation covered so that this person won’t negatively affect you [got it].

I’VE BEEN THINKING ABOUT THIS phrase all week.  There’s a truth to it, no doubt.  But I dunno, here’s the thing.

Is it not possible that you notice hurtful behavior in other people because you’re an observant person who watches how other people behave and misbehave, thereby giving you insight into what makes someone else tick?

Just because I can spot what’s going on with someone else, doesn’t mean that I’m like that.  I’d say it means that I’m perceptive and empathetic and tuned-in to the people around me.

I’ve no pithy conclusion here, other than to say that my assumed interpretation of this phrase was wrong.

And now I know better.

Questions of the Day:

Anyone ever hear this phrase before? Use it in polite conversation or in comments? How far out of the mainstream am I to not know what this means?