IN THESE TIMES OF MONOTONY courtesy of the coronavirus & political blowhards & summer heat I continue my quest to provide thrilling blog content here.  Thus I’m going to show you, my gentle readers, something so exciting I can barely contain myself. 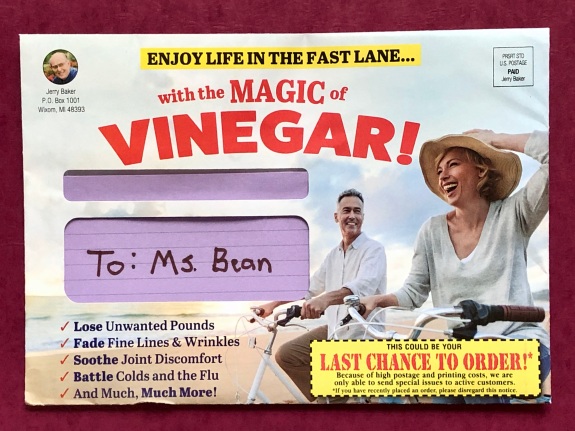 YESTERDAY I RECEIVED THE ABOVE piece of snail mail that tells me I may enjoy life in the fast lane if I order Vinegar: The King of All Cures! by Jerry Baker, America’s No. 1 do-it-yourself expert.  This book of vinegar magic costs $31.96, payable in 4 installments of only $7.99 each. According to Jerry if I buy this book I will: “Never be stuck, stumped, or stymied again!” 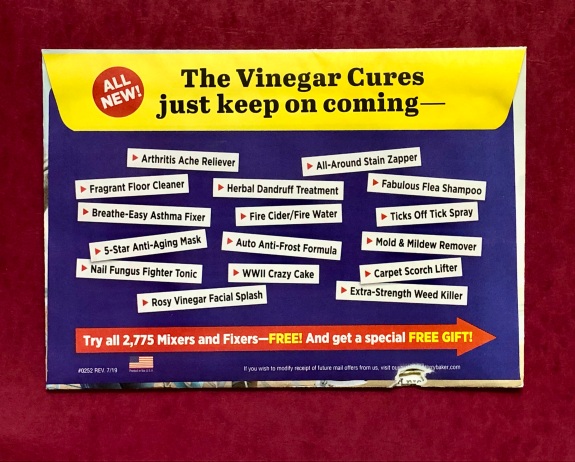 BELOW IS AN EXAMPLE OF the kind of magical advice featured in Jerry’s book.  This glimpse into his book is quite the teaser, isn’t it?  As Jerry, author and exclamation point freak, says: “No job’s too big, no job’s too small… Vinegar solves ’em all!” 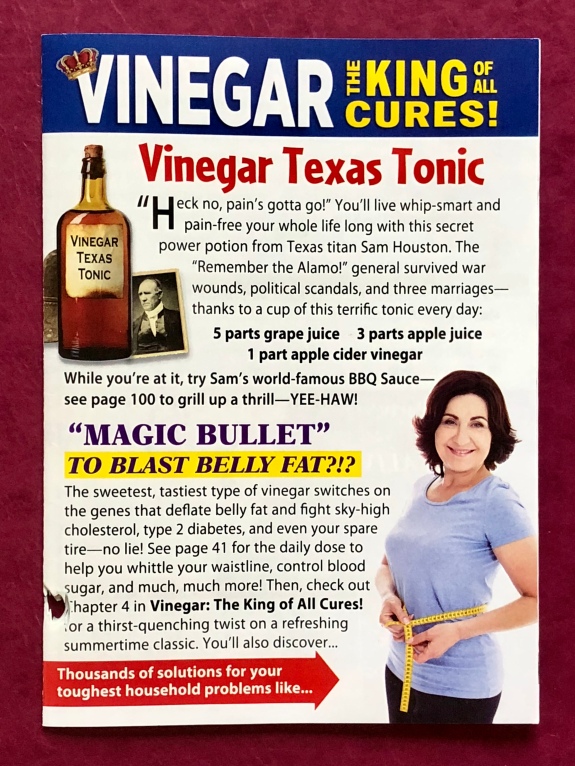 JERRY ALSO INCLUDED A TESTIMONIAL in the form of a short story about how Peter and Katie, a lovely married couple, made their home smell fresh prior to Peter’s parents coming over for dinner.  [Spoiler alert: It was a close call, but vinegar saved the day.] 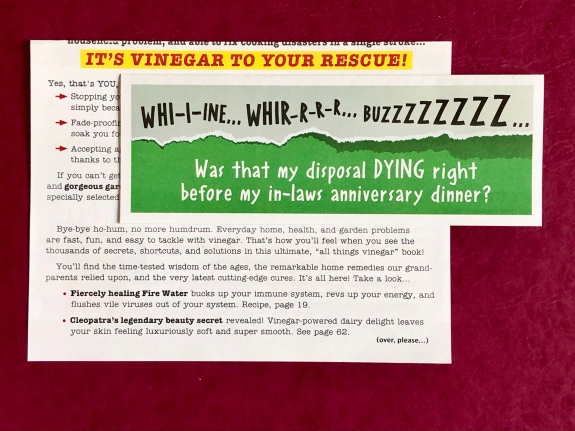 AND WITH THAT I SHALL end this informative blog post in which I have confirmed we are still here, virus-free and healthy, while taking the opportunity to ask you the following important questions.

What magic is keeping you going these days? 🤔

Are you a liberal, moderate, or conservative user of exclamation points? And why? 🤓

Have any good salad dressing recipes? 😋

While we’ll never know why this person put this particular bumper sticker on his car it does lend itself to contemplation. I figure we all know how to ANNOY each other without any further investigation, but we can contemplate who THE BORING might be.

‘Tis a fact that you have to define your terms if you want to communicate a useful + meaningful message.  No doubt this bumper sticker was meant to be a prompt for existential thought, a declaration of raison d’être, and a catalyst for conversation.

II.  So I sat down at ye olde computer to find the dictionary definition for *boring* while also checking what the thesaurus had to say.  Then I did a fast internet search about *boring people* so I might learn about the traits generally associated with people who are considered boring.

Synthesizing this information I created the following cursory list of the types of people who I shall refer to jointly and separately as THE BORING.

STALE: stuck in a rut or routine never doing anything new

LACKLUSTER: have no opinions about or passions for anything in life

QUOTIDIAN: hang on phone or stare at other screen instead of engaging directly with people

TIRESOME: only complain or talk about their disappointments in life, what is wrong with the world

SOUL-DESTROYING: lack, or do not use, empathy/are bad listeners

STODGY: have no sense of humor &/or cannot tell a story/joke

III.  Below is a poll question for you to answer.  I listed THE BORING, as defined above, in such a way as to allow you to pick one.  That is, which one of these types of behaviors drives you bonkers the fastest?

Or to put it differently: WHO WOULD YOU LIKE TO ANNOY THE MOST? 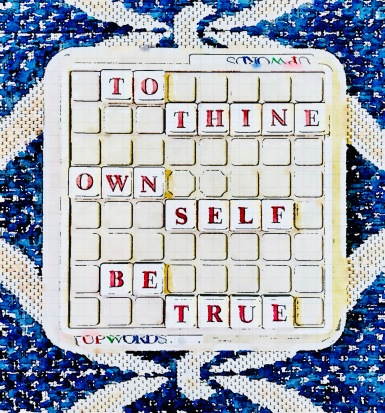 THE JILL’S QUESTIONS OVER THERE PART

In fact she asked me to answer her questions, so I did.

Should you care to read my answers to her questions then click on I WANT TO READ ALLY BEAN’S ANSWERS TO JILL’S QUESTIONS and you’ll be magically taken over there to her blog.

Wanna know a secret, my gentle readers? Yes? Well then lean in closer and I’ll tell you one.

When I chose SIMPLIFY as my word of the year I planned on taking this summer off from blogging.  Just bug out completely.  Detach entirely.

However plans change.  Perhaps you, too, live in a state where you are still being asked to stay at home?  Well, we do and we are.

Now clearly I have the time to post to this blog, but summer [in the northern hemisphere] is when I’ve found that personal blogging slows down to a dribble.  Plus I’m in a blogging rut, in the mood for a change, a simplification as it were.

And with that I wish y’all a groovy weekend and a happy summer.  I’ll be here when I’m here.