The sun came out over the weekend so we went for a walk along a biking + walking trail that runs through the area.  [Read a previous post about it HERE.]

Usually when we walk this trail going out into the countryside the trees are leafy green so we cannot see what is beside the trail, but this being late winter the leaves on the trees didn’t obscure the views.

This is what we saw.  Much of it was new to me, even though it’s been there all along, just hidden from view.

I’m sure there’s a lesson in this post but I’ll leave it to you, kids, to discern it.  I’m still trying to figure out what time it is.  Spring forward, my Aunt Fanny.

This blog is mostly words and thoughts, but perhaps you’d like to see what I’m seeing around here at this time of year? 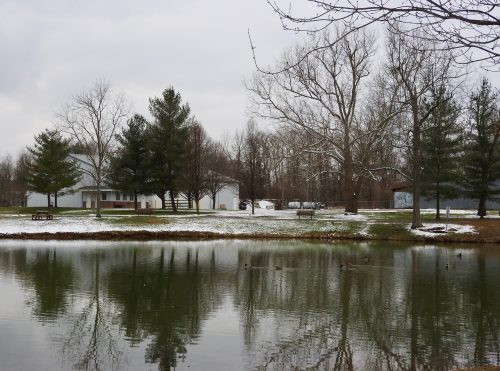 It’s not the brightest time of year but there is weak light that makes for some interesting photos. 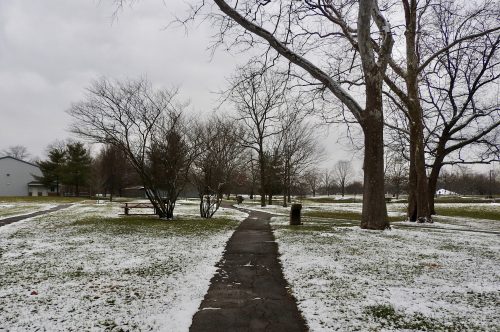 However, mostly it’s gray outside with not much snow. 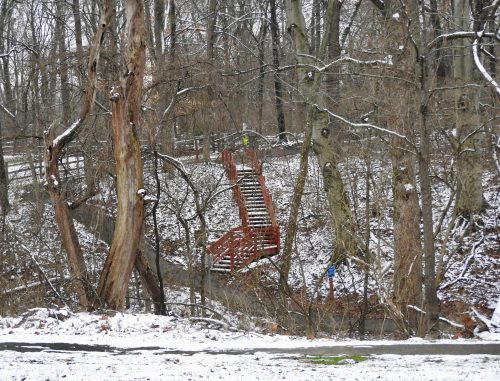 Of course, with the leaves off the trees it’s possible to see from afar what’s ahead of you on the path.

And despite the gloom there are bridges to cross just for the heck of it. 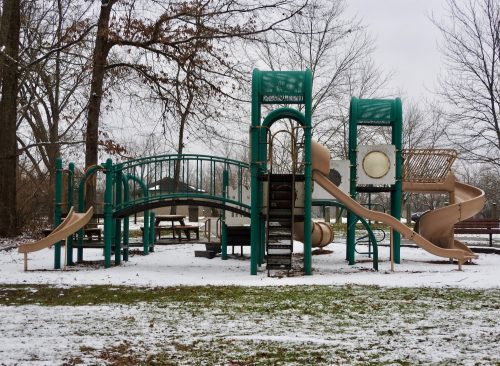 But in the end, it’s not the most cheerful time of year outside, she says stating the obvious while counting the days until spring.

GOT ANY SUNSHINE WHERE YOU ARE? DO TELL

Zen-Den and I were shopping at a large outlet mall, an outside one on about an acre of land.

Lots of walking. Lots of people.

As we were moseying along, me staring in all the store windows, him guiding me along so that I didn’t bump into anyone or anything, I got grumbly with him.

He kept telling me where the stores were.  The stores had large signs that I could read but he kept calling out their names like a disembodied voice on a subway line.

Finally I asked him why he was doing this.  He said:

“It’s my job to point out the stores to you.  It’s your job to judge them harshly.  That’s how it works with us.”

Today I’m joining Thursday Doors, hosted by Norm Frampton, so that I can share with you photos of the following doors plus a little more.

A few weeks ago Zen-Den and I had the chance to stop by the Columbus Ohio Park of Roses again. [Click HERE for post about previous visit and information about this park.]

It was a beautiful summer day but the garden was not at its rosy best like the last time we were there.  I snapped a few pics anyhow, ostensibly to be part of this project.

While the doors we saw were more utilitarian than awe-inspiring, the carved stones in the walking path that connect the Shelter House [event venue] to the park itself were eclectic.

I hadn’t noticed the messages on the stones during our previous visit.  So below, for the heck of it, are two photos of the doors we saw and the pithinicity on which we walked.

Today I’m joining Thursday Doors, hosted by Norm Frampton, so that I can share with you photos of the following doors plus a little more.

On a sunny winter’s day we went to Rowe Woods which is part of the Cincinnati Nature Center.  Within Rowe Woods is Krippendorf Lodge.

Built in 1898-1900 and originally owned by Carl & Mary Krippendorf, this large home is on the National Register of Historic Places.  Krippendorf Lodge sits on 175-acres of wooded land that was once called Karlsruhe Gardens [meaning Carl’s Place of Peace], but is now called Lob’s Wood [I know not why].

Today Krippendorf Lodge is an event venue, available year-round for rent.  From the outside the building itself appears to be in perfect condition, as are the adjacent outbuildings that include a unique water tower.

I was unable to get a good pic of the front doors to Krippendorf Lodge, but I took a few other door photos while wandering around + a few artsy-fartsy photos for perspective. 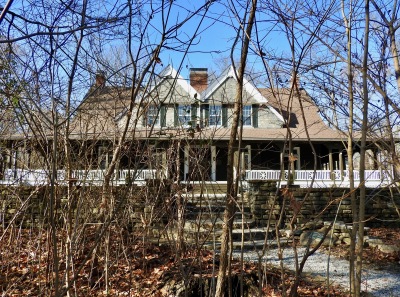 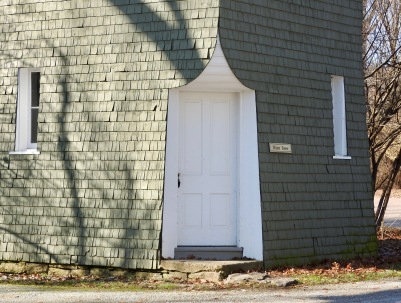 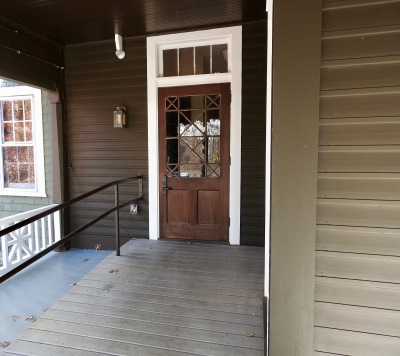 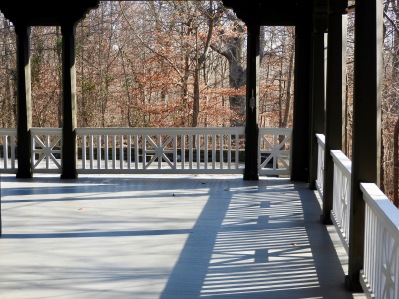 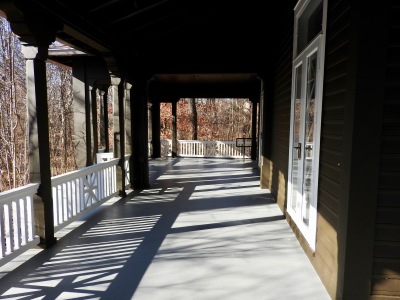 Have your read the interview with Rita Moreno in which she says “tough darts” in response to a question about how intimidating her presence might be at a rehearsal of West Side Story?  [Read here.]

I like this woman and immediately adopted TOUGH DARTS as my newest favorite way of saying: oh well, get over yourself, whatever.  It’s an old-fashioned version of “too bad, so sad” which is another one of my favorite sayings.

On Saturday the sky was gloriously clear and I decided that we needed to go to a popular county park on the other side of nowhere from us.  We hadn’t been there in years and I remembered it as being a lovely tranquil place to walk while enjoying ducks on the lake.

And who doesn’t like watching some ducks do ducky things while you’re outside for a healthful walk?

Well, we found the park, but as we drove into the parking lot we were surprised by how few cars were around.  Beautiful day… warmer temps… Saturday afternoon… THIS DIDN’T MAKE SENSE.  Where were the people?

Come to find out after our Polar Vortex week the temperatures had gotten warm enough to create flash flooding that had left much of this park submerged under water.  When we set out on this adventure I didn’t know that, however once we got to the park we could see that the paths had debris on them or were muddy as heck or were still under water.

Thus our walk could not be.

But I had my camera with us so I took a bunch of random photographs of what I saw around me.  The following seven photos show you, my gentle readers, the ducky walk that wasn’t. 🤨

I took these photos when we decided to stop at Miami Whitewater Forest, a Hamilton County Ohio park. The park is in southwest Ohio, close to the Indiana and Kentucky borders.

It covers over 4,000 hilly acres, features an 85-acre lake, and is named for a Shaker community that used to thrive in this area.

On the sunny day we visited the park we went for a look-see, moseying around, not intending to do anything in particular.  Here are a few photos of what we saw. 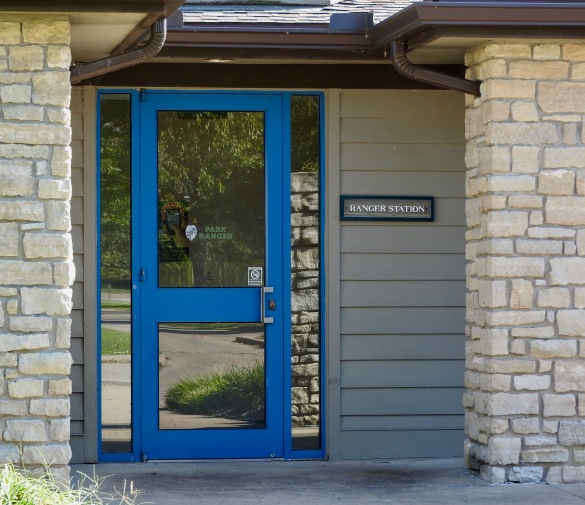 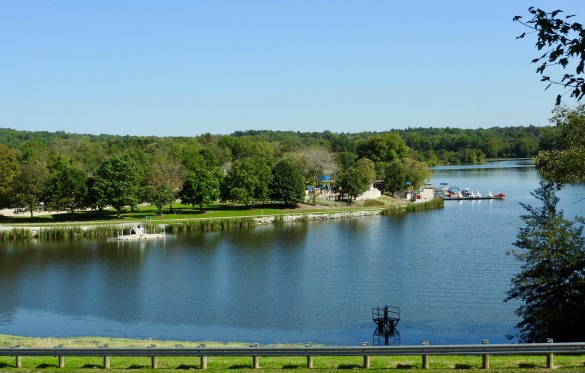 Lake with docks as seen while sitting on bench on nearby hill.

A small brown leaf… or is it?

A butterfly that appeared where the brown leaf was!

A deer doing its thing while standing in the scummy part of the lake.

My pale scrawny Birkenstock-encased tootsies as seen by me whilst sitting quietly and watching deer doing its thing.

DOOR, in the sense that a trash can flap is door-like, as seen on a trash can with a lovely lake scene behind it.