Twelve years ago we had our house built.  Today we both agree that the floor plan is great for us.  It’s a transitional style home, so we have rooms that are traditional and we have rooms that are contemporary.  The rooms are juxtaposed in such a way as to create an interesting, non-cookie cutter feel to the house which adds a fun energy to the place.

But I never really liked how the inside of this house looked.  We worked with the builder’s interior designer and I’m not sure that she knew what she was doing.  She gave us pinky beige and taupe walls– with dark cherry cabinets, creamy tile, yellowish bathroom counters– and shiny brass knobs and door handles everywhere.  I trusted her, but either she put the wrong neutrals together because she was stupid.  Or she put the wrong neutrals together because she was malicious.  [We refused to go with her first design plan for our house: purple walls, leopard print, shiny brass with beveled glass light fixtures, and black counters.  Really.  Not kidding.] 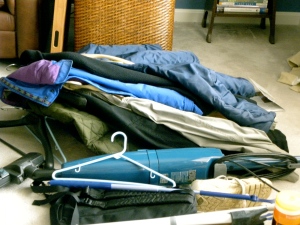 So for eight years we lived with what we paid for.  I tried to correct a few of the rooms but ended up with a so-so look in each space.  It bummed me that things never looked right and Zen-Den, who has a good eye for decorating, was too busy at work to focus on how to fix things here at home. 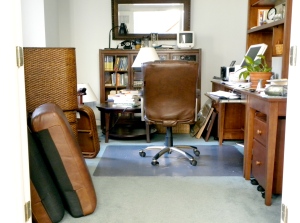 Then four years ago, in what I can only describe as a burst of peri-menopausal bravado, I announced that: “If I’m going through the change, so is the house.”  Zen-Den, bless his heart, said: “okay.”  And with that, we set out on what has come to be known as The Just Say Nope To Taupe Project. 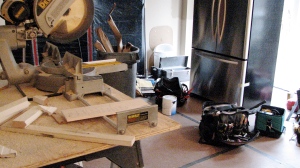 Since then it’s been almost non-stop change.  We’ve kept the furniture and accessories that we both liked– and sold, Goodwilled, or St. Vincent de Pauled the rest.  [A few antiques still need to be sold to a dealer.]  We’ve painted or had someone else paint almost all the walls and ceilings and trim in the whole house.  [One room to go.]  The kitchen has been entirely remodeled and the master bathroom has been refreshed.  And now we’re to the point where we’re slowly removing the old wall-to-wall carpet and putting wood floors downstairs/new carpeting upstairs. 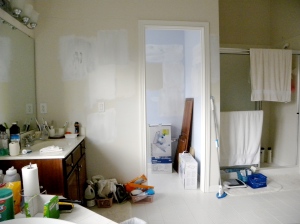 While I did have a pretty good idea of how much money it was going to cost to redo everything, I didn’t have any idea of how much clutter this project was going to generate.  At some point in the last four years every room in our home has undergone some sort of change– which has created various degrees of chaos caused by stuff shifting back and forth between rooms and the basement.  Zen-Den has taken this process in stride.  Me, perhaps, not so much. 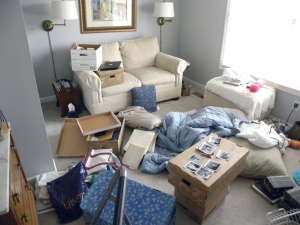 I’m glad that we decided to do this whole house overhaul instead of moving, but I won’t lie and say that it’s been a fun project.  It’s been very anxiety inducing for me, an English major turned self-taught interior designer, to make all these color and style choices.  Obviously, improving a house while property values are dropping across the country is a bit of a worry, too.  I doubt that we’ll ever get our money back from The Just Say Nope To Taupe Project.  But I don’t know that I really care about that.

What I do care about is the fact that we have a home with a cohesive color scheme, comfortable furniture, and a sense of our quirky personalities— three things that were lacking previously.  We’re relaxed when we’re at home now.  It’s our house fixed up the way we like it.  And we both feel like we belong here– finally.

11 thoughts on “The Just Say Nope To Taupe Project”