Zen-Den and I were shopping at a large outlet mall, an outside one on about an acre of land.

Lots of walking. Lots of people.

As we were moseying along, me staring in all the store windows, him guiding me along so that I didn’t bump into anyone or anything, I got grumbly with him.

He kept telling me where the stores were.  The stores had large signs that I could read but he kept calling out their names like a disembodied voice on a subway line.

Finally I asked him why he was doing this.  He said:

“It’s my job to point out the stores to you.  It’s your job to judge them harshly.  That’s how it works with us.”

This is the brainchild of Linda G. Hill. Click on the badge to learn more & to connect with other bloggers who are doing #1LinerWeds this week. 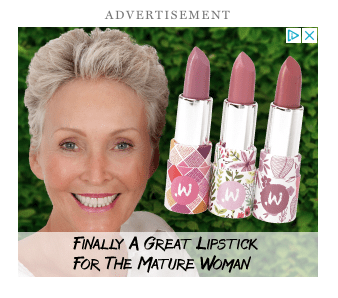 WHO YOU CALLING OLD?

The above advertisement has been following me around the internet like a bored toddler.  It showed up on my email sidebar a few days ago and has stayed with me as I research and read all over the intertubes.

I can’t decide if I’m insulted by the advert’s implication that I’m mature [old?] OR if I’m charmed by its desire to help me look better. Presumably.

Of course if you look closely you’ll notice that there’s no indication of the name of the company that makes this allegedly fabulous lipstick nor where I might buy said lippy.

But here’s the thing, no one has asked me.  It’s as if no one cares about my need for or opinion about the product featured in this unsolicited advertisement that will not go away.

And no matter how much I keep smiling about this advert, and all the other unsolicited ones that clutter my computer screen, I cannot help but feel irritated by the impudence of these wet-behind-the-ears companies assuming I’d want to buy anything from them because they’ve decided I’m mature.

photo by Alexas_Fotos via pixabay

With a hat tip to Jimi Hendrix, I’d like to share with you, my gentle readers, that this has not been a wonderful spring.  This makes me sad because I love late spring.

It’s my second favorite time of year. Oh yes it is.

However this year, to continue quoting Jimi, “Lately things they don’t seem the same, Acting funny, but I don’t know why.”

Which is me alluding to the fact that all it does around here is rain.

Pots of herbs so wet they are existing in a weird soggy stasis, looking pathetic. 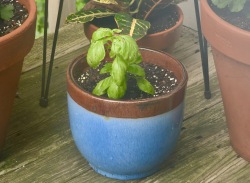 In the parlance of ye olde weather forecasters who claim to know why we’ve had this excessive, soul-sucking rain: there’ve been “numerous ripples of energy” that have brought more rain showers and thunderstorms to the region than are normal.

However, be that as it may, while the rain continues unabated I’ll just contemplate “am I happy or in misery” while I’m stuck inside the house today in my own version of a caffeinated, irritable, non-psychedelic  gray haze.

My late spring blogging hiatus is over.  Because of the almost constant rain I [we?] didn’t accomplish everything I [we?] wanted to do, but I’ve researched that which has not been done and made plans about how to do it.

For me, a solutions girl, that’s a big deal.

So here’s what did happen: we got a new roof put on the house. And kids, that’s a noisy and messy thing to have happen.  This is the third time in my life that I’ve had the pleasure of living in a house as a new roof is installed.

Next time, should there be one, I’m going to a hotel for the duration.  The 30 hours of noise involved in tearing off an old roof and then putting on a new roof made me anxious.

[Consider that the understatement of all time.]

Try to contain your excitement has I tell you about a few other homeowner things we did whilst I was not here.

In other words, not to put too fine a point on it, we spent a boatload of money on necessary home maintenance projects that will improve our lives, but said projects do not immediately bring joy to my heart.

Like a long vacay in Hawaii would. Or a first class excursion to London. Or a train trip across Canada.

[All expensive, potentially joyful, adventures that I long to do.]

But that’s what happens when you have a house you consider your home– and you are responsible adults who lack a fairy godmother to magically, in an instant, transform and repair your house with the flick of her wand.

Question of the Day

So what’s new in your life? Anything magical? Tell me about it in the comments below. I feel so out of touch with everyone.

Doorbell after being shown who is boss.

Last week was a troublesome one for me.  It was rascally and I got scattered and I lost focus on my one word of the year, streamlined.

I had dreams of getting it together last week, doing the things on my to-do list in a smooth and centered way like the organized lady of the list I long to be.  But the Universe scoffed and instead, beleaguered by annoying things, I was distracted me from my true purpose.

Nothing bad happened, only small RIDICULOUS annoying things happened that began to slow me down and wear on my very last nerve.  Here is a list of those annoying things:

• tornado warning with winds gusting to 60 mph that took down a piece of our house’s gutter;

• smoke detector battery went chirpy during the day when I was here by myself, without anyone to spot me to climb on a ladder to change the battery, so the smoke detector sang all stinking day;

• the water department turned off the water to this subdivision because of a nearby traffic accident, thus in one day our water was off for 6 hours, on for 2 hours, then off again for 4 hours;

• landscape crew arrived without advance warning to do spring cleanup, then piled mulch in such a way as to trap my car inside the garage;

• laundry service lost one of Z-D’s shirts and told me such when the delivery man came to the front door, handed me the laundered unlost shirts and asked me if I could tell him which shirt was missing… as if I pay any attention to Z-D’s extensive collection of mostly white or pale blue button-down Oxford cloth dress shirts;  and finally

• doorbell got stuck on meaning that the button, after being pushed in, connected with the bell box that rang its melodious ding, then the bell box started to buzz… loudly and ceaselessly… until I got a screwdriver and dismantled the doorbell separating the wires to make the stupid thing be quiet.

At this point, if I were an inspirational sort of blogger, I’d share with you a pithy lesson, succinctly put, so that you might learn from my experiences too and say to yourselves: what a wise Bean is Ally for sharing her troubles here and showing us, through her example, how to live better lives.

Other than to say, I guess, it’s rather empowering to acknowledge setbacks, complain about them, then get over your sorry self while you carry on with another week as if you’ve got it all together.

We’ll see about that. Won’t we?