The final writing prompt for June 2014 NaBloPoMo is:

“Leave your readers this month with commentary about their comments.”

You, my gentle readers, are the best.  I’m grateful for your kind interest, thought-filled comments and support.  I realize that you arrived here from all over the place:

I appreciate you making your way here, and as a way of saying thank you I’ve compiled the following list of everyone with a blog who commented on The Spectacled Bean during this month. 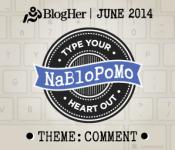 I’ve gotten away from talking about our home redecoration projects here on The Spectacled Bean. I don’t know why, because they continue on behind the scenes and influence my life every day.

Often because the project is in the middle of everything. 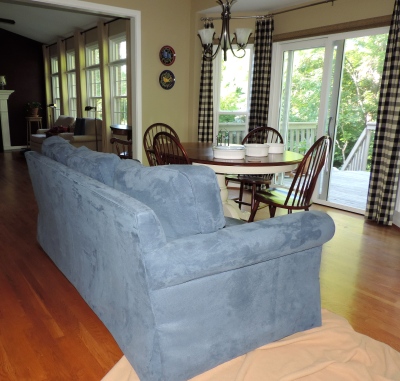 That being said, now that I’m in the final days of NaBloPoMo June 2014 and I need something to write about, I’ll revert to my blogging roots and tell you what we’re up to around Chez Bean.

In July or August when furniture goes on sale, we are going to buy a new sofa and chair for the TV room.  This is why the current sofa got itself moved into the kitchen.  I needed to get an idea of what the TV room would look like without a large blue object influencing me. 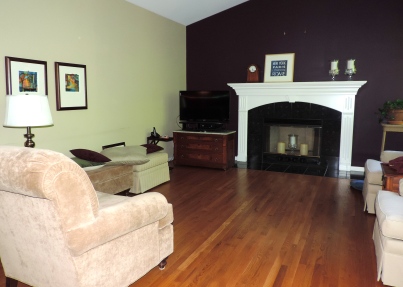 Now having seen the TV room, sans blue, with my makeshift ottoman-esque example of what a khaki-gold sofa might look like against the wall, I think that a neutral-colored, nubby-textured sofa and chair will look great in this room.  With lots of colorful pillows, of course.

So that, my gentle readers, is what’s going on here… right now… in the middle of our kitchen.

WHILE I HESITATE TO ADMIT that I’m aware of anything as sappy as The Hallmark Movie Channel, I feel that I must share with you, my gentle readers, how they have betrayed my forgiving nature.

This is a straightforward story in which I was willing to overlook their basic programming because every afternoon they were showing The Good Wife, an award-winning TV show that I’ve always wanted to see.

In fact, I had even begun to arrange my day in such a way as to make certain that I caught at least one episode of The Good Wife, a modern-day TV show that features a strong female lead in difficult situations that she handles without Prince Charming rescuing her. 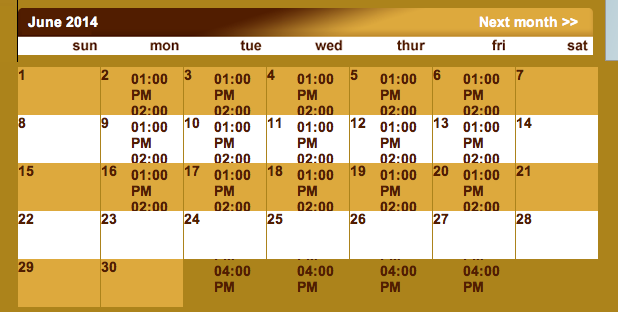 FURTHER, I’LL EVEN ADMIT THAT last Friday afternoon when I viewed what has now become my last episode of The Good Wife, a well-paced finely nuanced TV show, I was so thrilled by the cliff hanger plot line that I spent moments of my weekend looking forward to seeing the next episode on Monday afternoon.

But it was not to be.  No, when I sat down on Monday afternoon to watch The Good Wife, a smart TV show filled with legal issues and moral quandaries, it was not there.  Instead, The Hallmark Movie Channel was airing…  [ready for this?]… Diagnosis Murder, an old-time TV show, starring Dick Van Dyke, that I vaguely remember as something my mother used to watch way back when.

I’m hurt by this betrayal;  I won’t lie.  But mostly it confirms my suspicions that cable TV’s death is closer than we think it is.  Thanks to The Hallmark Movie Channel I’ve now learned for certain that web-based programming, like Netflix or Hulu, is the way to watch TV shows when your life is busy– and you can’t dork around with cable channels.

… because information is FUN dammit.

“What’s in a name? that which we call a rose. By any other name would smell as sweet;” ~ William Shakespeare, Romeo and Juliet

√  to grasp the implications of what it means to be your age, go here.  MILDLY UNSETTLING.

√  to find out what your birth month color says about you, go here.  FUN.

√  to determine which goddess you are and how to dress yourself like she would dress today, go here.  INFORMATIVE.

√  to understand how your emotional intelligence influences your personality, go here.  FASCINATING.

√  to learn which Shakespeare character you are, go here.  JUST BECAUSE.

HAVE YOU EVER HEARD yourself say something and think to yourself:

Did I really say that?  Honestly, who am I?

Zen-Den and I, with some friends, were at an art show in a park that is along a river.  We’ve been to this particular show many times together, and we each have our favorite artists who we want to checkout.  It makes for a predictable, leisurely afternoon.

Z-D AND I WENT into one particular artist’s tent to see what he had going on.  For Z-D this guy is the highlight of the show, so he stopped to talk with the man.  I looked around but didn’t see anything that I wanted so I went outside to stand with our friends who were waiting.

When Z-D caught up with us he hadn’t bought a thing.  He turned to me and said: “what did you think of his stuff this year?”  And then I said the most out-of-character statement that I may have ever said.  I replied:

“Oh, his work is so derivative now that it’s passé.”

THERE WAS A PAUSE while all of us looked at each other– and then we started laughing so hard that we had to stop looking at each other because of my absurd statement.

Accurate as it may be, I have no idea where that sentence came from.  I’m not exactly an art critic [or a critic of anything, for that matter].  All I can think is that I’ve read too many scholarly articles on Arts & Letters Daily.  Might be time for me to focus more on People magazine.

I’M GOING TO FILE this charming little story, ridiculous as it is, under:

Do Not Take Yourself Too Seriously.

Derivative? Passé?  Who says things like that?  Not me, usually. That’s for sure.