This summer has been humid and wet– mold everywhere on the roses, on the tree trunks, on the sides of terra-cotta pots, on stones along the paths.

Perennial plants, such as cat mint, are so waterlogged that they’ve wilted, unable to spread their roots, trapped in clay soil that has formed its own kind of water-filled hole around them.

And then we have some potted annuals that are going out of their way to show-off their colors.  Like these petunias, for instance.  That have gotten leggy and dramatic, attempting to cover the entire deck.

On a weird note, unlike previous years in which squirrels took over our property, this year has brought us rabbits, snakes and one red fox.  The rabbits seem intent on eating all the weeds [yeah!], while the snakes lurk under bushes, near the front door.

Not happy about that.  Neither one of us is.

The red fox seems to be joyful as he jogs across our property.  Don’t know much about him, being a newcomer to the suburb ‘ya know, but from the skip in his step I can guess that this summer is his kind of weather.

On an encouraging note, I’m happy to report that two of my three my milkweed “experiments” are doing well.  The plants that I started from seed didn’t take, but the white milkweed, a sturdy plant that I purchased at the garden center, is growing 30″ tall in the back yard near the woods.

No flowers yet, but looking good. 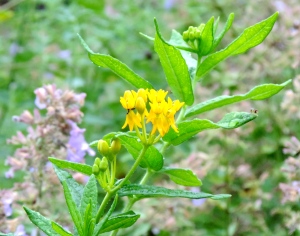 The yellow milkweed, purchased at the same garden center, looked half-dead when I bought it.  Withered brown-tinged leaves.  Not so big.  But now, planted in full sunshine near the garage, it’s about a foot high and has pretty yellow flowers on it.

Just goes to show, don’t judge a potted plant by its leaves.  😉

I’m not certain but I think that we are beginning to get monarch butterflies here.  Zen-Den saw one when he was mowing out back– and I snapped this photo of a butterfly [moth?] when I was out front.

Usually by mid-summer I’ve glorious flowers, waiting in the sunshine to be photographed. But this year I have Noah on speed dial while my camera naps the days away.

Too soggy for photos of posies.