GOBSMACKED.  My car, parked legally on our street, was in an accident.  I found out about this when a neighbor, then a police officer, came to our front door to tell me that someone had rear-ended my vehicle.  Was it another car? A truck? A van or SUV? A person on a motorcycle?

No it was not.

It was a man on a bicycle who was going so fast that when he lost control he propelled himself through my back windshield, shattering it to bits.  And hurting himself so much that he had to be airlifted to a hospital across town.

[I have no further information on his condition at this time and my car is in the process of being repaired.] 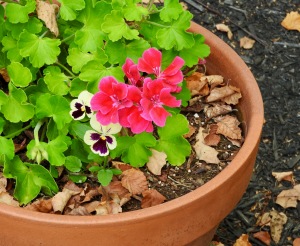 DISAPPOINTED.  When Google Reader shut down a few years ago, I started using Feedly as my RSS reader.  I was thrilled with their straightforward, fresh and easy-to-use format.

In fact, as one of the early community members I told everyone I knew about this service because there was no fuss when reorganizing your feeds, no distractions when reading your chosen content.

Earlier this spring, I graciously consented to take a few in-house Feedly surveys, each of which had about a gazillion questions.  In my responses I praised what the company was doing, telling them that I appreciated how they were staying true to the idea that simplicity is best.

Well, Feedly didn’t listen to me.  And last week they changed their simple box-oriented organizational format to a cluttered mess of feeds, shown in lists overburdened with distracting data.  When I asked Feedly what the heck was going on, they told that the community wanted this.

Really? Hmmm. Not everyone.

[Therein I will leave this story, wiser to the truth in the old saying: if you aren’t paying for it, you’re the product.]

EXHAUSTED.  Our 3 to 4 week remodeling project, that started on June 5th, is now into week 10.  We’re still waiting for the rest of the decorative tile to arrive– and now we’re waiting for the second custom frame for the shower doors to arrive.

Why?  The first custom frame, measured correctly, was then created in the factory incorrectly.  This first frame, when installed in our bathroom, was too short for the doors.

So until a new frame arrives, sometime before Christmas one hopes, we have shower doors leaning against the wall in the bedroom, rather than serving, what I would believe to be, their intended purpose in the bathroom.

[This project has had more unanticipated screw-ups than even I could envision– and I’m pretty damned creative & fretful when planning anything.]

SADDENED.  It is with sorrow that I share with you, my gentle readers, that Fuzzy the Squirrel has passed away.  I’d been seeing less of him around the deck this summer, and when I did see him he was moving slowly, not even bothering to swipe a few tomatoes from my pot.

Last week while watering flower beds out back of the house, I found his almost lifeless body, under a bush near our lower level patio.  He glanced at me, then rolled his eyes upward, as he twitched his right front paw in the air.

Shortly thereafter he was gone from this world.  However, Fuzzy will be remembered forever in the pages of this blog.  May he RIP.

[All stories about Fuzzy the Squirrel are here.]

THING ONE: Looking Up 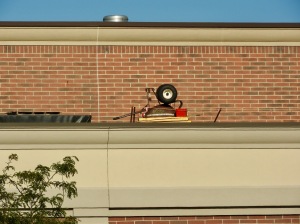 Our local Kroger is undergoing a remodel that started in April.  Since about day 1 this upside down wheelbarrow has been on the roof, not moving, just sitting up there.  While the unexpected wheelbarrow placement is a charming bit of whimsy, every time I see it I chuckle to myself wondering if anyone doing the remodel remembers that it’s up there.

Care to place a bet as to when [if] it ever comes down? 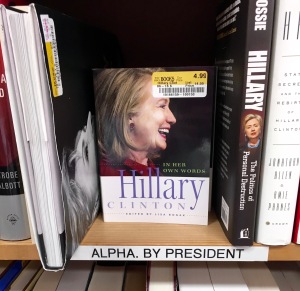 Shopping in Half Price Books I noticed that the clever employees have quietly moved all the books by and about Hillary Clinton off the “First Ladies” shelves to the nearby “Presidents” shelves.  This might be presumptuous OR it might be prophetic, but it is, if nothing else, an unexpected bit of humor.

Good people in that store. I like how they think.

Fuzzy the Squirrel, who hangs out around our house, has found a new, unexpected way to entertain [annoy?] me.  For the first time he’s leaving nut shells all over any concrete or stone surface in front of the house.  Meaning that when I want to get the mail I have dodge sharp nut shells as I walk to the mailbox OR use a broom to sweep the shells away as I walk along.

Sure, he’s cute, but oh. so. bothersome.

{ This post, inspired by Nerd in the Brain‘s Three Things Thursday, is part of a weekly blogging event dedicated to the idea that gratitude is awesome and leads to smiles. You can join in too. Go here to learn more. } 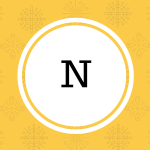 Nuttier than a squirrel’s pantry

THE OTHER MORNING I was looking out into the forest behind our house, admiring the color green, when I noticed that Fuzzy the Squirrel was on the ground, up to something.

He rarely allows his little paws to touch the ground, preferring to stay above it all in the trees… or in our gutters… or on our deck.  I was intrigued.

I’D BEEN THINKING ABOUT the origins of the saying, nuttier than a squirrel’s pantry, all morning.  So when I saw Fuzzy, in a flash of inspiration, I decided to ask him if he could explain the meaning of this saying, from his point of view.

Straight from the squirrel’s mouth, so to speak. 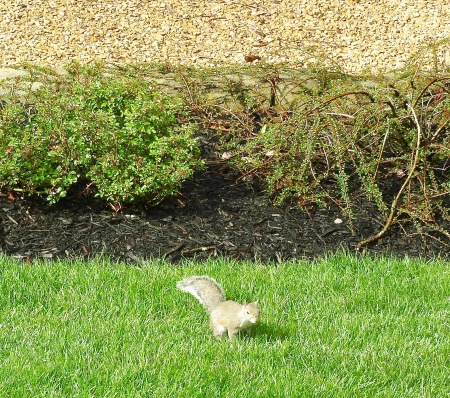 WELL, MY GENTLE READERS, I was not prepared for what our favorite squirrel had to say.  But I give him credit, he told it like it is.  He didn’t mince words, nor did he spare my feelings.

YOU SEE, COME TO FIND OUT, from a squirrel’s perspective, this seemingly innocent and silly human saying, is offensive and disparaging.

Squirrels take it personally, looking down upon us humans who say it.  To them, this saying is animalist.  Decidedly not PC.

And inaccurate, as Fuzzy was quick to point out before he scampered away.  “Lady, we got more than nuts in our pantries. We got seeds and leaves– and sometimes a good old-fashioned purloined tomato from your very own pots of veggies.”

Thus he confirmed that: 1) he did steal those tomatoes years ago;  and 2) that squirrels might not be as nutty as we humans think they are.

Q1: What is wrong with this picture?

A. Not a thing… did I ever mention my favorite artist is Salvador Dali?

B. How clever! You’ve built a sliding board for Fuzzy the Squirrel.

C. It looks like some more of the gutter has fallen off the back of your house… AGAIN.

D. What’s wrong with this?! Every stinking thing. The end of the world is nigh.

Q2: What caused this gutter to come undone?

A. I don’t understand the question… you know Dali painted some surreal works with absurd off-kilter angles just like this gutter.

B. A squirrel jumped up and down about a hundred thousand times on the gutter.

C. Ally Bean allowed herself to dream of buying a new laptop computer for herself, not because she needs one, but because she WANTS one.

D. What caused this to come undone?! Every stinking thing. The end of the world is nigh. 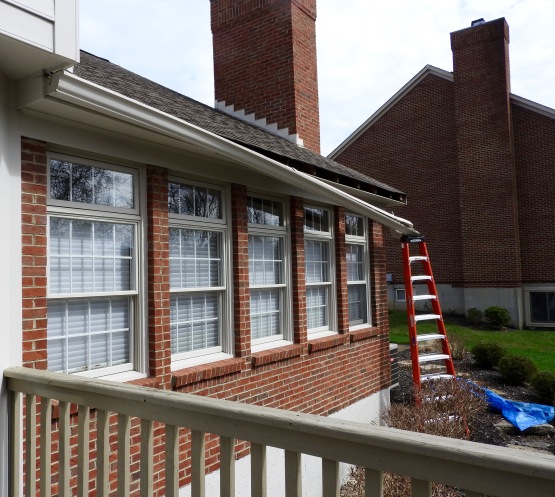 Q3: What did Ally Bean mutter when she saw what had happened?

A. I imagine, like Salvador’s work, her words were a bizarre juxtaposition of pathos and profundity, of oddness and obviousness.  A mélange of commonplace utterances and curse words.

B. Where is that damned squirrel!

C. Holy Fricking Mole-y! I gotta call Z-D, who is, of course, out-of-town on business, to tell him I’M. NOT. HAPPY.

D. What did she say?! Every stinking thing. The end of the world is nigh.

I stepped out onto our deck to enjoy the fresh air and clear skies. I wasn’t thinking about much of anything when I sensed that I wasn’t alone.

I looked up into the trees that form our backyard and guess who was up there waving hello?  None other than your friend and mine, Fuzzy the Squirrel.

He looked to be in good shape.  I’m figuring he’s around at least 5 years old, which is pretty old for a squirrel who lives in the wild, if you can call our backyard the wild. 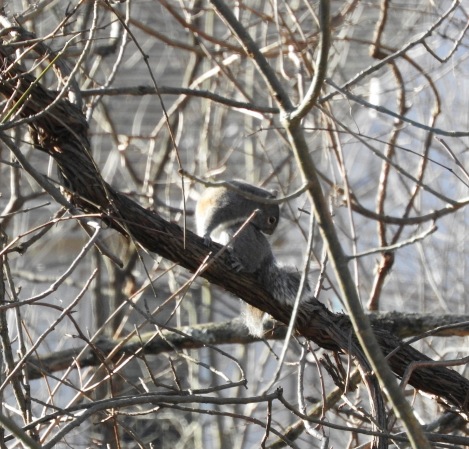 I did notice that while he was twisting around to tidy up his fur, he was hanging tough on his tree branch, not even bothering to give me a second glance.

He seemed to be content to just sit up there, not barking or doing much of anything.  I’ve never seen him so calm and Zen-like.

So I took a few photos of him, watched him as he dozed off to sleep– and couldn’t help but wonder how much longer my blog posts will be featuring Fuzzy the Squirrel.  [Read more about him here.]