ONCE UPON A TIME ON A FINE SPRING DAY… the lady of the house went to the store and bought a small pothos.  She brought it home and planted the pothos in a beautiful terra-cotta pot that featured smiles & dots on its rim. 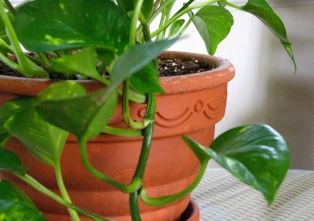 WHEN SUMMER CAME UPON THE LAND… the lady of the house decided to take her early morning mug of coffee onto the screened-in porch, sit in her favorite wicker chair, sip her java and gaze upon her potted pothos in the pretty pot on the porch. 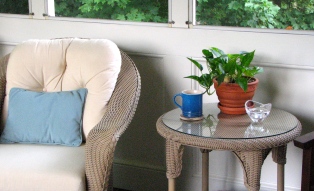 And all was well in the land.

UNTIL ONE MORNING… the lady of the house realized that there was something new & different about her pothos.  That during the previous hot, humid night the potted pothos had changed in a very weird way. 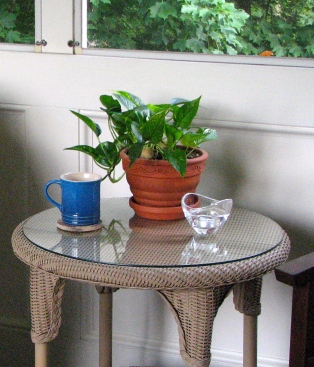 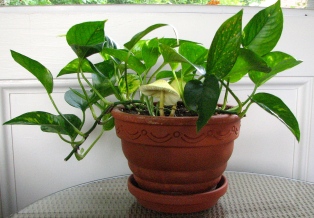 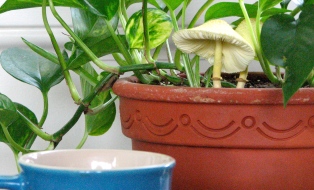 And suddenly the lady of the house had an idea.

FEELING THAT THERE MUST BE AN EXPLANATION FOR THIS TURN OF EVENTS… the lady of the house found a link to a webpage that explained exactly what was going on with her potted pothos in the pretty pot on the porch.  She discovered that her beloved potted pothos had a fungus called Leucocoprinus birnbaumii, aka Lepiota lutea, the yellow houseplant mushroom.  Further she learned that this fungus, which had created these yellow mushrooms, was harmless as long as it was not ingested. 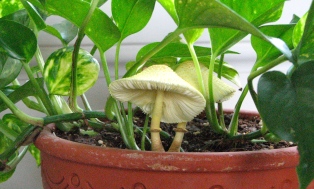 And there was learning in the land.

So she let the yellow mushrooms be & allowed them to go through their 48 hour [more or less] life cycle.  During which time she enjoyed the unexpected, color-coordinated bit of beauty that they added to her potted pothos in the pretty pot on the porch. 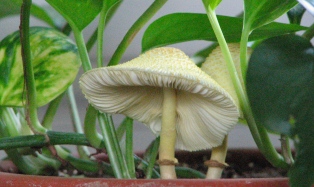 And once again there was peace in the land.