I enjoy looking at shelter magazines and interior design websites and home decorating projects on IG.  When I began to notice photos of bedrooms with chandeliers, instead of ceiling fans or ceiling lights, my curiosity was piqued.

Welp, after 20 years of looking up at a large white dusty boring ceiling fan in our bedroom, I was ready for a change.  I never liked using the thing, especially at night when rotating fan blades above my sleeping head worried me.

Made me fretful, they did.

So I decided that we’d replace our dodgy old ceiling fan with a pretty, useful chandelier that’d hang from the spot where the ceiling fan had been.  Here are a few things we learned along the way with this DIY project. 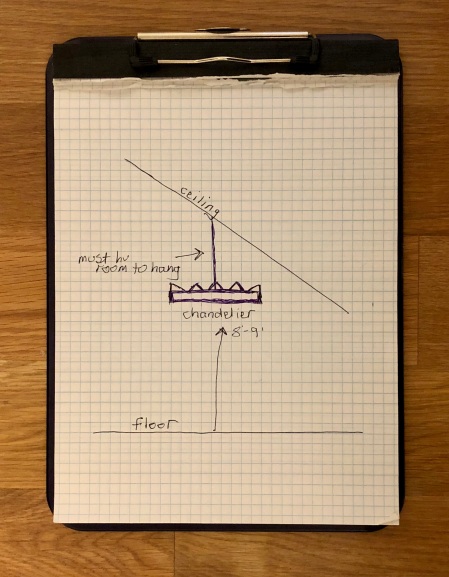 √ The chandelier we picked was 26″ wide, smaller than recommended, but for a good reason.  Keep reading.

√ A rule of thumb about how far down a chandelier should hang: the chandelier should be between 8′ to 9′ off the floor.  This is accomplished by allowing the light fixture to hang from a chain from the ceiling.

√  The trick here is that depending on the slope of your ceiling and the height of the chandelier, you have to allow for enough space above the top of the chandelier for it to hang down on a chain.

In our case because of where the junction box was in the ceiling we couldn’t have a chandelier that was taller than 25″ because there wouldn’t be any space for it to hang down from the ceiling.

√ Thus we picked a chandelier whose height allowed it to hang down from the junction box in the sloped ceiling, even though it meant that the width of the chandelier was a bit too small according to the rule of thumb.

In other words, we thumbed our noses at the rule of thumb. 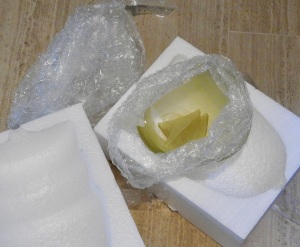 As is the way with any home improvement project we tackle, there was a problem.  One of the globes for the chandelier arrived broken.  Thus we had to email the company and wait for a replacement globe, crossing our fingers that it’d be the same color as the other four.

It came within days, was the right color, and looks perfectly at home with the other shades so all is good.

However, keeping in mind that I can be a silly person, while waiting for the shade to arrive, whenever I walked into the bedroom I began singing the following lyrics to the tune of One Toke Over The Line:

Awaitin’ for the shade that goes on, sweet Mary
Hopin’ that the shade is delivered on time
Sittin’ down here on the bed I sees it
One bulb over my head. 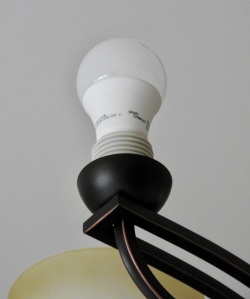