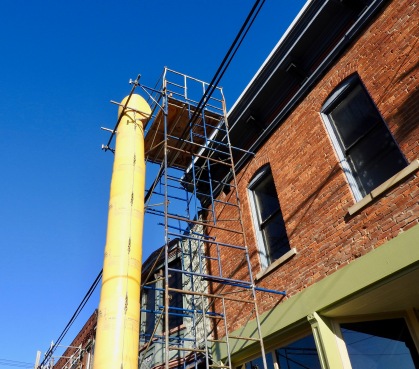 An old downtown building in the process of being improved: out with what no longer serves, in with what will make it safe.

•  Later this morning I’ll make my way to our current voting precinct in its current polling place.

It’s in an old Greek Church now.  The decor in this church is gold and overstated, think My Big Fat Greek Wedding, but the church members who welcome you to their church/polling place are as sweet as can be.

They stand in sharp contrast to the election board people who, it seems, would prefer to not be doing what they’re doing, as shown by the snarls on their faces.

•  When we first moved here over 20 years ago we voted at the VFW Hall.

Situated back a long creepy lane, to get to this polling place you followed the signs for the “Sunday Turkey Shoot” that lead to a grass parking lot.  Then you stood outside in the weather until the election board people allowed 2 voters at a time inside the building.

We’d moved here to this big city suburb from an upscale small town and were shocked that the polling place, reeking of cigarette smoke, still used paper ballots– and consistently ran short on pencils.

We learned to take a Benadryl before we went to vote and to take a pencil with us.

•  Our next polling place was at a fancy golf course.

It was easy to get to this place that had a real parking lot, lighted even.  At first it seemed ideal, however this is the polling place where Zen-Den, Esq., got mad and made a point.

He was not pleased about how the partisan people who lurk around the outside entrance into the polling place were positioning themselves;  they were too close to the building, thus breaking the law.

Or Zen-Den. Or his wife. Who they consider to be has much of a troublemaker as he was.

Guilt by association, you know?

•  All of which brings me to today’s foray into the American voting process.

I’ve paid no attention to any of the people who are running for office this election cycle.  In what will a first for me, an Independent voter, I’ll be voting a straight Democratic ticket.

If the GOP won’t do the right thing and depose our so-called president, a sexual predator, business fraud, Russian-backed, draft-dodging old man, then I’ll start the ball rolling by getting rid of the GOP.

Are you with me here, kids?  If last year’s presidential election confirmed one thing for me, it’s that you can do everything right and still fail;  BUT it’s important that you do that right thing anyhow.

Words to live by.