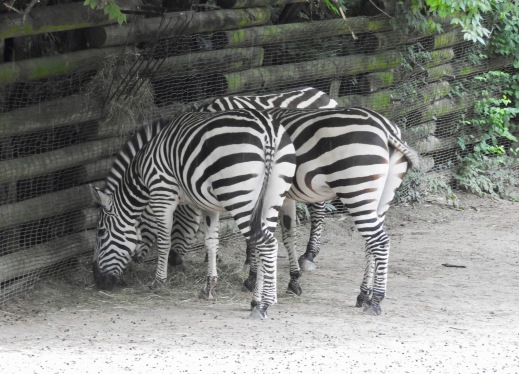 Last week was the unofficial beginning of summer in the northern hemisphere.  We were on staycation so we had to go to the zoo.

On the day we went to the zoo the weather was hazy and humid, drizzly, so most of my zoo photos weren’t amazeballs.  As I’d hoped they’d be.

In fact this photo of the zebras is the only one I kept from our visit. I kept it because it’s not half bad, from an artsy point of view, and because it lends itself to a good question of the day: how many zebras do you see in this photo?

I ask because I snapped the picture not realizing that there were three zebras standing together.  All I saw were two black and white zebra rumps.

Especially, I suppose, because the animals, known collectively as a dazzle, were standing still having a little nosh.

[Unlike the flamingoes who weren’t at their best, having been dipped in Pepto-Bismol then rolled in dirt, looking drab and confused by the weather.  Or the totally uncooperative gorilla who was a lovely shade of bricky orange, but wouldn’t stop moving for me to get a pic.]

Anyhoo, getting to a point here– I’m back from our staycation.

And I do believe, if I might be paradoxical and pithy here, a perfect way to gear up for the summer… by slowing down. 😎

96 thoughts on “As Our Summer Begins, A Dazzle Of Zebras”