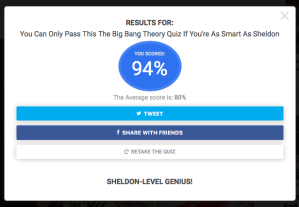 I’M LOOKING FORWARD to watching the series finale of The Big Bang Theory.  It airs tonight and I want to know how the show ends.

I’ve enjoyed the show, having seen it in reruns and in prime time.  I’ve not watched every episode nor have I seen it in a linear way so some of the story lines are a jumble in my mind, but that doesn’t matter.

The Big Bang Theory is all about the characters and their relationships with each other.  I especially like Penny.  She’s my favorite.

This scene could be from my real life.  I occasionally find myself in the middle of conversations wherein one person needs to remember how to be kind while the other person needs to engage in some critical thinking.

I have yet to say the above out loud directly to anyone, but I’m thinking it. Dagnabbit.

THE SECOND PIECE of Penny advice is from the end of an episode in which Penny has sat through a tedious Physics Bowl competition at the university.  In this competition Sheldon and Leonard try to prove who is smarter.

Later as a way of showing the guys how little they actually know she creates her own pop culture quiz.  They, of course, are clueless about what she is asking them.  Baffled, Leonard asks her how she knows this stuff.

She answers with a classic line that I find myself saying from time-to-time, a line perfectly suited for ending this post, in fact. She says: I go outside and I talk to people.

Will you be watching [or did you watch] the series finale of The Big Bang Theory? And if so, which character is your favorite?

Do you like or dislike or are indifferent to The Big Bang Theory? It’s been on the air for 12 years so you’ve had ample time to form an opinion of it. ‘Fess up.

If you took the quiz I linked to under the image of my score, what score did you get?

132 thoughts on “The Big Bang Theory: In Which I Share 2 Pieces Of Advice From Penny + Ask A Few Questions”