:: I USED TO write about the various home redecorating projects we had going on around the house.  Chez Bean was almost a character in and of itself in this blog.

But over the years, as every ding dang one of those projects dragged on, I stopped writing about them because who wants to read the ramblings of a whiner talking about first world problems?

:: HOWEVER, I’M THINKING that because this particular project seems to be going well, I’ll tell you, my gentle readers and fellow interior design aficionados, that we’re painting the walls in one of the guest bedrooms.

This is the bedroom in which we have a couple of upholstered chairs & a small little desktop computer area & a TV & some books shelves.  Years ago Zen-Den the Literal began to refer to this space as the Un-Bedroom, and the name stuck. 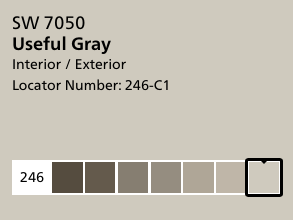 :: SO WHAT COLOR are we painting the Un-Bedroom ?

The walls are now in the process of becoming Sherwin-Williams 7050 Useful Gray, which is a color I chose after reading about it here on THE COLLECTED Interior.

It’s a neutral, calm, warm gray color that Zen-Den, the person actually painting the walls, has announced is the best. color. ever.

I like it because it’s a color that both He Who Paints The Walls and She Who Makes Important Decorating Decisions can agree on.

Making it, I believe, most useful.  😉

42 thoughts on ““Useful” Was The Word Of The Weekend”