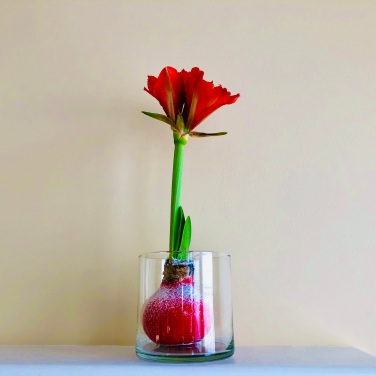 This is a photo of a blooming amaryllis that first bloomed in late December and has now re-bloomed in mid-February. Let’s give it up for this likable go-getter.

I FIND PEOPLE FASCINATING, although I’ll admit that what people do is much less interesting than why people do what they do.

Therein is the start of many a good conversation. N’est-ce pas?

You can tell me every stinking detail about WHAT you do in your life, but if I have no idea WHY you do what you do, I’m much less inclined to be interested in you.

To be clear I’m not here to fix people. I figure my job is to observe [what’s up] and understand [as best I can] and help [when asked] and report [in this blog] on them.

This brings me to the point of this post.

[And I sure as heck am not going to tell them.]

I’m not saying these are the most rational ideas, but they are enlightening and have made me smile as I listen politely, nod my head encouragingly, and murmur nondescript soothing sounds of understanding.

√  Friend A dislikes photos of food.

This would be any food, either plated, for sale, or in the process of being made. Friend A feels these photos are something that could potentially make her fat because they trigger her to want to eat, which she is always trying not to do.

Friend A is thin.

She doesn’t like food photos so much that she won’t join IG where she feels too many people share photos of food, but does admit that she likes seeing people sitting around a table on which there is food.

She thinks they’re are an egotistical show of shallowness that distracts from any relationship. She wants to see what a person is looking at, not what the person looks like while they are looking at something.

Friend B is artistic.

Because of her firm conviction about the wrongness of selfies, she ignores them as best she can which means she’s ignoring a lot of people. This reality, she admits, gives her pause.

√  Friend C dislikes photos of paths in the woods.

She extends this principle to photos taken of city sidewalks with buildings on either side, but seems less harsh with her criticism allowing that sometimes those photos are interesting.

THUS HAVING SHARED THESE three character studies based on the truthful mutterings of generally kindhearted people with a need to vent, I’m reminded of Eeyore’s wise words: “We can’t all and some of us don’t. That’s all there is to it.”

This, of course, leads to me to asking you, my gentle readers, a few questions as catalysts for discussion about photos you see on social media.

When it comes to the photos your friends + family share, do you have a strongly held opinion about any one type of photo you dislike seeing?

Do your friends + family know that you dislike seeing that type of photo and WHY?

Or to put a positive spin on this conversation, do your friends + family know which photos you prefer to see and WHY?