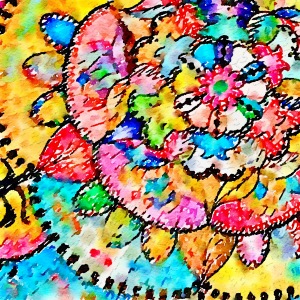 You put together a puzzle. You take a photo. You run it through the Waterlogue app on your cell phone and this is what you get: PRETTY!

I was sitting in the waiting area in a small boutique eyeglass shop that is in an old house, formerly a residence, but now zoned for commercial use.

I was having my spectacles adjusted. The optician helping me had taken my glasses with her into the back of the house, probably into what was formerly [maybe still is?] the kitchen, to have her way with them.

Across the room from me a different optician was talking with a man who was ordering new glasses. The room we were in was what would have been the living/dining room, with an 8′ ceiling, about 20′ x 15′ in size.

This man hadn’t gotten new glasses in over 12 years. The optician had found his file, a paper one, and was confirming details by saying things about him out loud to him.

BUT THERE WAS THIS LITTLE ISSUE WITH ACOUSTICS

Inadvertently I was overhearing everything that was being said between these two people. I didn’t want to hear but I did. I’ve changed the specific details to protect his identity, but the following is what I know about this man:

The optician didn’t ask about the following but in the course of their conversation I also learned that:

Obviously I accidentally know a lot about this man, the proverbial ship I passed in the night. If I was a person with nefarious intentions I could easily have snapped a fast photo of him + his car’s license plate, then assumed his identity by knowing these random, but incredibly personal, details about him.

213 thoughts on “In Which I Do NOT Steal A Man’s Identity, But Could Do So Easily”