IN THE MIDDLE OF THE NIGHT I woke up with itchy eyes.  I have lots of boring medical problems with my eyes so this happens.

Downstairs on the kitchen counter was a bottle of prescription eye drops that I knew would relieve my itchy eyes, but it was all. the. way. downstairs. and I was toasty warm in our bed upstairs.

However, I couldn’t get back to sleep so I begrudgingly got up and went downstairs at 3:00 a.m. to instill [that’s medical lingo!] a drop in each eye.

Of course while I was downstairs waiting for the drops to do their thing, I glanced out the window to see what was happening outside.

Curiosity.  Or habit.  Maybe both. 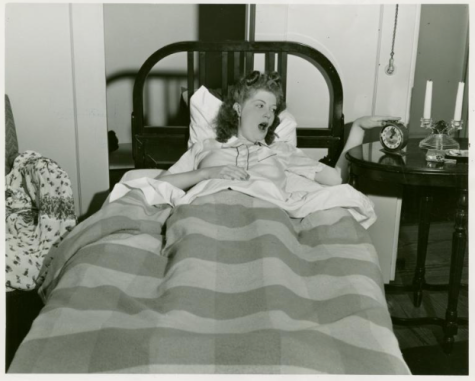 ABOUT FIVE MINUTES LATER I WENT back upstairs to bed where I thought I quietly slipped into bed again.  But apparently my blanket shuffling was more disruptive than I realized and I awakened Z-D.

After politely inquiring if I was “ok” Z-D, who knows my habits, asked what the weather was like outside.  I told him that it had snowed, but that it had only snowed on the grass, not on the sidewalk, driveway, and street.

I assured him that was what had happened outside.  It had snowed on the lawn, not on the hard surfaces.  I’d seen it.

Then he rolled over away from me taking the covers with him and began to snore.  I would have ignored him entirely but he had swiped too much of the blanket and I wanted my part back.

SO I TUGGED ON THE BLANKET which roused him again.

At which point, in his sleepy daze as if the conversation about the weather was still ongoing, he said to me: “you’d have to be some kind of stupid to not know that snow falls on everything outside.  It just doesn’t land on the grass, it falls on hard surfaces, too, where you don’t see it because it’s melted.”

And with that he fell fast asleep, leaving me, the stupid person, to realize that: 1) he was absolutely right;  & 2) I had no more interest in talking to him if he was going to use annoying old logic.

I mean, really– this is a man who can’t find his car keys at noon when they’re on the kitchen counter right in front of him, but he can tap into meteorological reasoning when awakened from a sound sleep in the middle of the night?

Who does that?  Honestly…

60 thoughts on “Pillow Talk: Of Snowy Nights and Annoying Logic”